The advantage of being a paralegal and an experienced cyclist 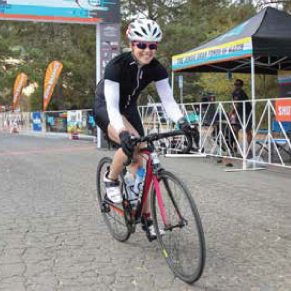 In Northern California and beyond, Heinrich Law’s clients are injured on Oakland, Berkeley and San Francisco city streets, in residential neighborhoods, on curving roads as they wind through the hills in Santa Cruz or Hollywood, while riding through busy intersections, and while pedaling in designated bike lanes.

In addition to being the Senior Paralegal at Heinrich Law, I’m an avid cyclist.

After we take on a new case involving a bike crash, I will often put a Go-Pro video camera on my helmet and ride my bicycle to the location of the incident to observe all the details.

Does the road get narrow? Is it poorly maintained? What is the lighting? Is there a blind curve that car drivers speed through too quickly? Is there a designated bike lane?

On a recent case involving a serious bike crash in the Berkeley Hills, I discovered that the location of the accident was an area of road with a poorly maintained shoulder. Drivers needed to yield to allow other cars and bikes the right of way.

Seeing the location from the perspective of a cyclist allowed us to better understand how the driver who hit our client was at fault. We successfully built our case around this discovery and easily discredited the adverse driver’s claim that our client, the bicyclist, was at fault for the incident.